In ancient times, the pike was a legendary fish in Irish waters.
Meetings with large specimens were fodder for legends about giants who would live under water.

And not all the legends were invented. The pike is a predator that appears all around Ireland. The big boys are definitely the most impressive residents of the Irish underwater world.
The most caught pike are many times smaller than the giant pike which undisturbed swims around in the depths and shows up only very occasionally.

Pike Fishing in Ireland is a sport that charm both professional and hobbyists. You can almost compare it to a pilgrimage if you especially come to Ireland for this magnificent fish here, but the prey is quite worthwhile.

The pike in Ireland is growing faster and is earlier mature than their relatives in Europe, this is due to the excellent living conditions and the quantity and quality of prey fish.

Irish pike may weigh in its fifth year around 10 kg. and in his seventh year achieve a weight as much as 15 kg.

Especially in the natural surroundings of Lough Derg, the pike thrive and pike anglers fish as nowhere else.

Ireland today, compared to other European countries, has the strictest regulations for the protection of the pike.
-You cannot take or kill more than 1 pike per day and this may not exceed the lenght of 50cm.

In addition to pike fishing on Lough Derg, you can also choose to fish on the smaller lakes, the so called East Clare Lakes, known for their large number of pike. We then drop/collect you and the fishing boats by a lake of your choice.

Furthermore you can also choose to book a holiday with a Bellyboat (Floating Tube) and in the winter, when pike are really heavy, you can fish with deadbait from the shore with a rodpot.

Go to the packages and prices pages and make your reservation on time.

FisHerman keeps its guests to a maximum of 8 so he can provide the best quality service to them and therefore recommends to book on time your favorite period to avoid that the 4 rooms are full just when you planned your holidays.

The Lough Derg Pike. Painted in 1980 by Barrie Cook. On this canvas of 139 x 208 cm is immortalized the most memorable catch of Lough Derg. The pike of 41 kg, captured in 1890, is full-size painted. The real fish is being stored since more than 100 years in a pub somewhere in County Clare. 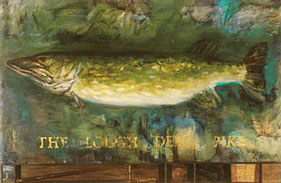 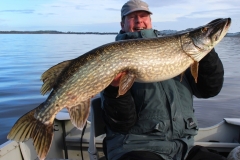 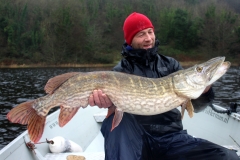 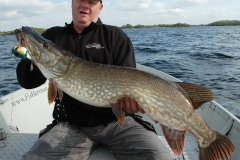 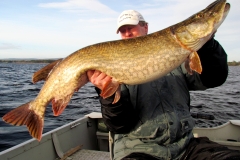